Diegetic, non-diegetic and beyond, establish your style of audiovisual storytelling

This article presents a way of organizing your project’s virtual soundscape, classifying your sound sources according to their relation with the narrative, or as it is also called, the diegesis.

The classification of your sound sources in the different layers of the virtual soundscape helps you:

Common terms that we usually find in articles about film sound, are “diegetic” and “non-diegetic”. Those are ways of separating the sound content, according to where it belongs when it comes to being part of the narrative or not.

The theory dates as back as 373 BC, when Plato examined the style of poetry in the Book III of “Republic” and Aristotle argued his own classification in “Poetics”. Of course we are not here to argue philosophically, although I am Greek and this is a classic stereotype, so I could act the part easily. 😛

We could also go full on Wittgenstein on their tushies and start randomizing track names and mixing without listening to sound, just to make sure that our work is completely naked from human error, but this is for another article.

It doesn’t matter if you are making a game or a film. To create a good mix, one usually groups sources together to create sub-groups that are easily managed and faster to manipulate.

Even if someone doesn’t like creating groups and likes keeping a flat hierarchy (which might be the best option for small productions), in that case, each sound is actually a group.

Deep inside we like organizing, it allows to keep things simple during fine-tuning and to create systems of logic that give our production our signature style. Design theory, based on cognitive science, argues that unorganized content that seems right for some reason, still follows some basic rules of organization we have embedded in our brain, or the deliberate break of those rules as an artistic expression of the self.

If you are not familiar with what soundscape is, you can read the article about soundscapes at Wikipedia. Of course the term “soundscape” has many uses, according to different industry fields or sciences. At SoundFellas we are using the term when we are talking about the complete auditory picture that the listener receives, or as Pauline Oliveros states “All of the waveforms faithfully transmitted to our audio cortex by the ear and its mechanisms”. In simple words, we use the term to describe everything that is received by the listener’s ear.

According to the definition above, when we are talking about the sound that your film or game is making, we are talking only about one part of the soundscape, as the complete soundscape also includes the acoustic environment of the listener’s living-room together with the sound coming in from outside of his/her house.

To remedy this grouping, we propose the use of the term “virtual soundscape”, to describe the sounds that are coming only from your film or game. So the soundscape coming from experiencing a movie in your living-room, is a combination of the virtual soundscape produced from the media you are consuming, and the real soundscape produced by the real environment that you are actually present. Juxtaposing, layering or interpolating between those 2 soundscapes, is of great importance in the field of augmented reality and a core part of the audio narrative of the entertainment layer of the Magicverse as it is proposed by Magic Leap.

“Diegesis” is a style of fiction storytelling that presents an interior view of a world and a very cool way to say “narrative” actually. As in films and games we always have a “narrators” at least in the form of the camera, that shows us the world from a specific and guided point of view (deterministic in films, stochastic in games).

This is the level that we will use as a pivot to classify our sound elements. You can read more in the article about diegesis at Wikipedia.
In the next paragraphs, we are going to present the classic “diegetic” and “non-diegetic” layers, but also expand on some more specific layers.

Organizing your sounds according to the soundscape layers and your narrative, is an important part of creating your own style and giving your audiences the best sound experience possible. 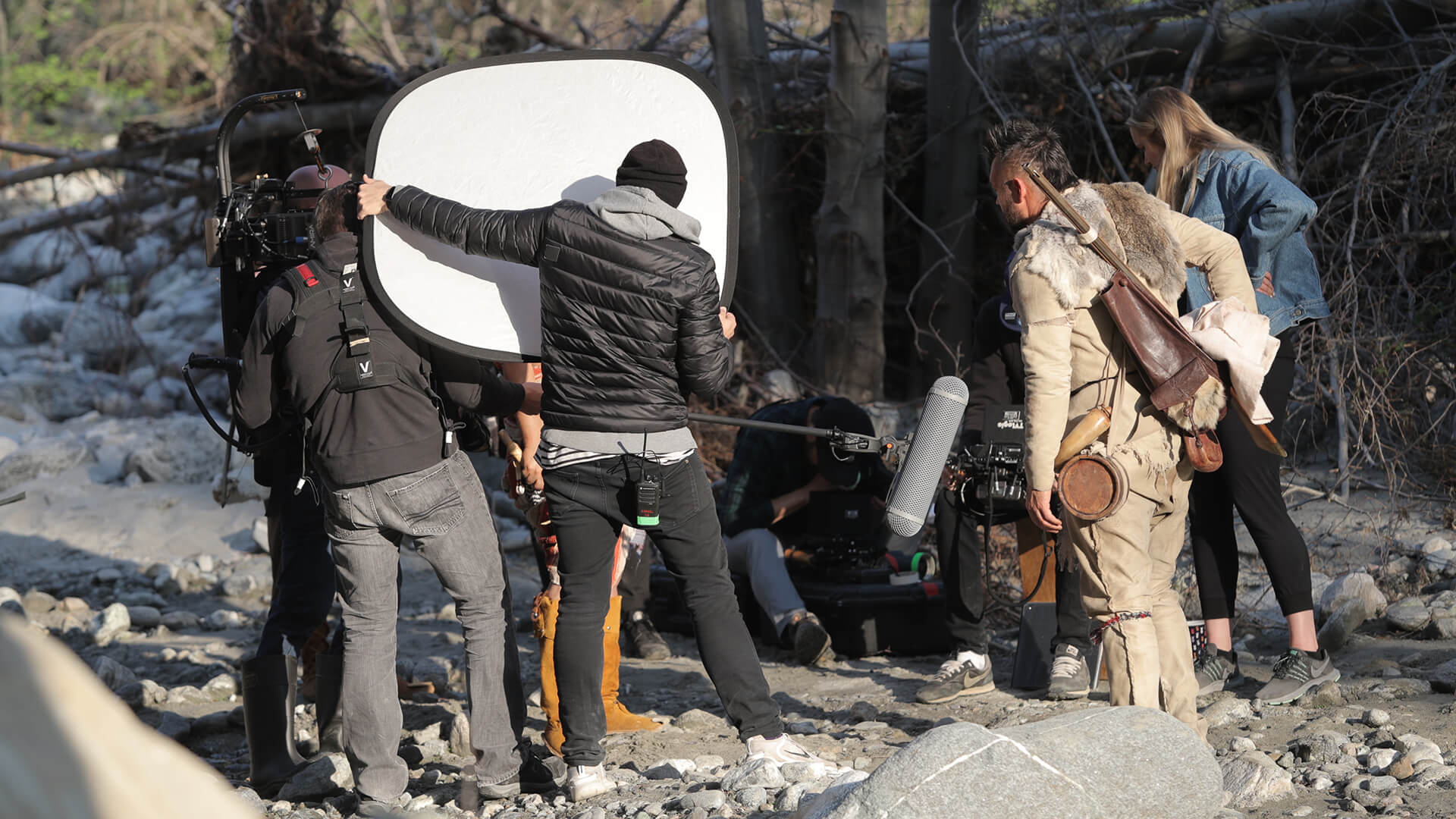 Figuring out the way you’re going to organize your project’s sound sources, from the perspective of the narrative (or diegesis), will give you the knowledge of which sounds you should gather from the set and how you should gather them. You can also make an early list, based on this knowledge, of the sounds that you will need to find from stock libraries. [Image by Joel Muniz on Unsplash]

Diegetic sounds are the sounds that come from within the scene that the story’s action is happening. The term is from the Greek word “diegesis” which means “narration” or “narrative”. Those sounds include also sources that don’t appear on screen, but the audience understands them as coming from the world of the story.

Any sound that originates outside of the story’s scene. It’s easy to understand this category if you think that those are the sounds that the story’s character are unable to hear.

This category describes any sound that moves in any direction between the diegetic and non-diegetic layers. Those sounds are of great assistance, when we need a cool way to link some transition, like the transition between two different scenes.

Acousmatic sounds are the sounds that are heard without any cause presented in the story’s world. Wikipedia also says that “the word acousmatic, from the French acousmatique, is derived from the Greek word akousmatikoi (ακουσματικοί), which referred to probationary pupils of the philosopher Pythagoras who were required to sit in absolute silence while they listened to him deliver his lecture from behind a veil or screen to make them better concentrate on his teachings”.

At SoundFellas we use this term as described by the French writer and composer Michel Chion in reference to the use of off-screen sound in film. Of course we use the term to also describe the same set of sounds in games and other media. Primarily describing the sounds that are coming either from the speakers located next to the visual display(s), are not linked with any visible cause from the story’s world, and are not out of the story’s world.

Those are two very useful definitions that we use at SoundFellas and come directly from Michel Chion, the terms are our own but you can read about the source of the theory in the article regarding acousmatic sound at Wikipedia. According to Michel Chion: “the acousmatic situation can arise in two different ways: the source of a sound is seen first and is then “acousmatized”, or the sound is initially acousmatic with the source being revealed subsequently. The first scenario allows association of a sound with a specific image from the outset, Chion calls this visualised sound (what Schaeffer referred to as direct sound). In this case it becomes an “embodied” sound, “identified with an image, demythologized, classified”. In the second instance the sound source remains veiled for some time, to heighten tension, and is only later revealed, a dramatic feature that is commonly used in mystery and suspense based cinema; this has the effect of “de-acousmatizing” the initially hidden source of the sound (Chion 1994, 72). Chion states that “the opposition between visualised and acousmatic provides a basis for the fundamental audiovisual notion of offscreen space” (Chion 1994, 73)”.

This is actually a sub-categorization of the “diegetic” type.

As we discussed above, the diegetic type can be categorized further into 2 different types. The first is the extra-diegetic and that leaves room for the second type, which is the intra-diegetic. Which is actually what we simply call the diegetic in films, which usually don’t include extra visual interface elements that the characters of the story are not aware of, but are part of the action. That kind of meta-data presentation is not used in films. So if you are not making games or some kind of gamified film production, this term is probably not of much interest to you. If you are making games, you can just use the term interchangeably with “diegetic”.

A special mention must be done here, in GUI designs in games that are intra-diegetic. For example – as it is written in Wikipedia – in the video game series “Dead Space”, the player-character is equipped with an advanced survival suit that projects holographic images to the character within the game’s rendering engine, that also serve as the game’s user-interface to the player to show weapon selection, inventory management, and special actions that can be taken. That creates a very nice link between the player’s world and the gamer’s world and can be also found in video games featuring vehicle simulations.

This is more of a philosophical term and it is used when a narrative happens inside another narrative. The term is not used often, but can be useful in special cases.

So, what are the advantages of using those layers to organize your project’s sound sources? Here’s some good reasons and of course I expect that your creative nature will invent even more.

So, what are you waiting for? From diegetic to acousmatic and all the layers in between, start designing the choreography and levels of your own project, and give your audiences the best sound experience possible.

At SoundFellas we can help you with that. Apart from hiring us to design and create the audio of your project, you will also find that our products are specialized for contemporary production, because: